I’ve put it put together for those who may find it difficult, during Covid restrictions, to visit the exhibition.

On this page you’ll see the paintings in my SALA exhibition “SOUTH AUSTRALIA IN WATERCOLOUR” hanging in the Gallery at Bremerton Wines, 14 Kent Town Road, Langhorne Creek, South Australia, from August 1st to 31st, 2021. They’re original watercolours as well as a few pencil drawings, done within the last couple of years, and are of places around country South Australia

Below each image I’ve displayed the number of the work, its title, approximate size overall including the frame, and the price.

If you’d care to purchase a painting, you’d be best to visit Bremerton Wines any day during the exhibition, between 10.00am and 5.00pm. Alternatively, call Bremerton on 08 8537 3093, and discuss your purchase directly with them.

I hope you enjoy the pictures and your visit to Bremerton. 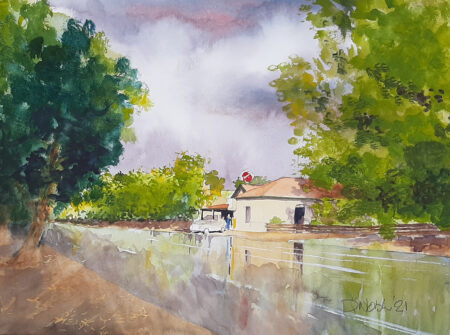 I painted this picture of our local pub in January 2021 during a very long, dry spell.   I thought I’d try painting it as a wet day, and so I had to imagine a grey sky and reflections in the wet road.   Strangely, the day after I’d finished, it rained buckets. 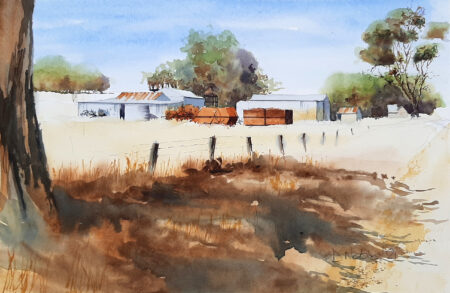 This is a farm near where we live.   We’ve often driven along this gravel road, high above Charleston and admired this view.   I think it’s typical of so many places in country South Australia. 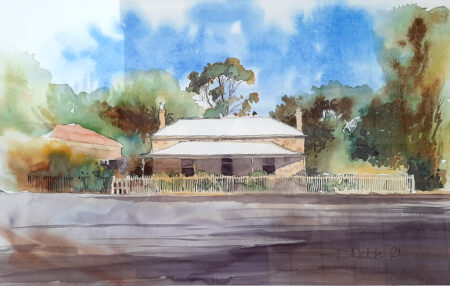 This charming little sandstone cottage stands on a corner in the middle of Charleston.   I love its ‘Early Australian’ architecture, that is, an English symmetrical cottage with a verandah. 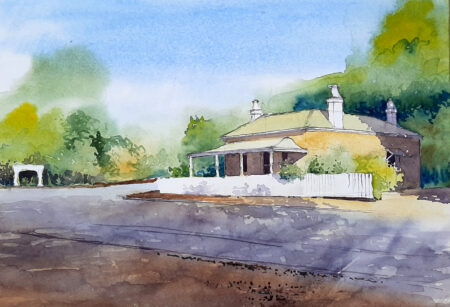 Yes, the same cottage as 2 above, in a convenient spot, 1-minute’s walk to the Charleston Pub, almost next door, and to the Onkaparinga River across the road. 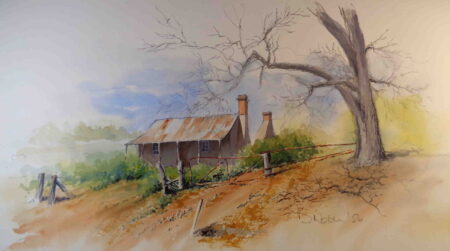 This very small, early cottage still stands, even after the disastrous Cudlee Creek bushfire of December 2019, on Lobethal Road, just outside the town. 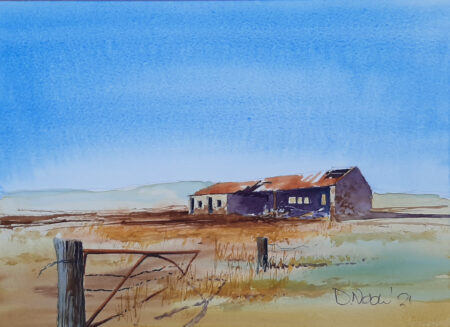 It’s been a while since this cow-shed, if that’s what it really was, saw a cow.   I imagine a time when cattle filed in and out to be milked, twice a day.   You’ll see this shed just outside Charleston, but you won’t see that drunken gate.   I invented that, but the rest is reasonably accurate. 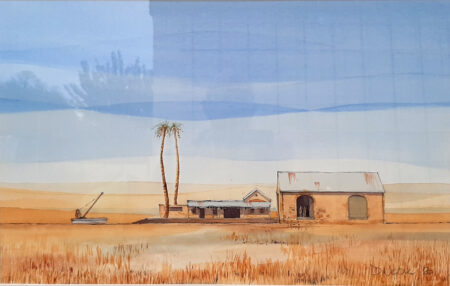 Manoora, Merilden and Farrell Flat were identical railway stations on the now-disused line north from Riverton to Terowie.   I like their un-pretentious architecture, honestly stating their purpose.  The stone goods-shed was being renovated when I painted this. 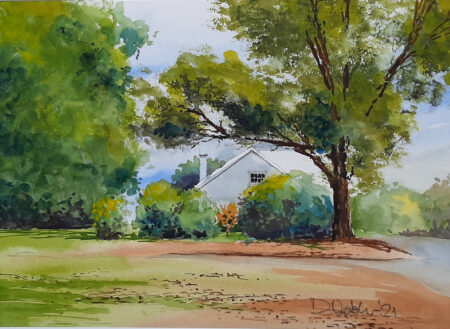 The current owner told me that this cottage, on Newman Road, Charleston, was the original one-room school.   The teacher’s accommodation was also part of the building, now a private house standing only a stone’s throw from the former railway.   Where trains ran until 1963, the Amy Gillett bikeway is for a different kind of transport. 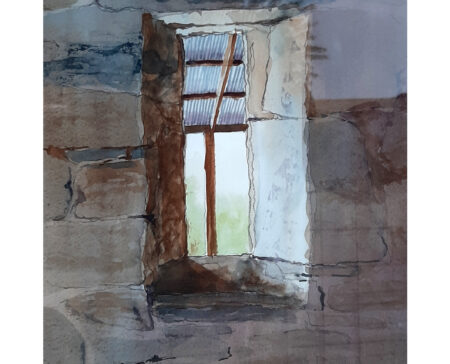 The current owner of the barn kindly stopped work and showed us through.   I liked the building’s very-substantial nature, typified by this view of a tiny window to the world outside.   It’s the same barn as number 15. 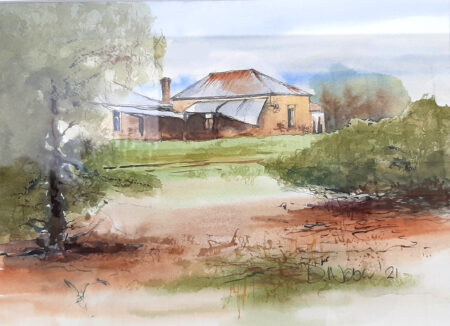 It’s near Owen, south of Balaklava.   I’m always on the lookout for opportunities for pictures, and this one we spotted beside the main road.   I painted this picture in the studio from the sketch in number 17. 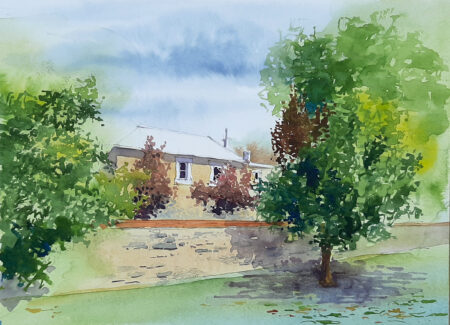 It stands on Newman Road, outside Charleston.   It’s another charming early building modelled on English houses of the 19th century and much earlier.   The current owner told me it was built by Charles Newman, after whom Newman Road is named.   It’s also possible that Charleston was named after him, or perhaps after Charles Dunn, another early land-holder. 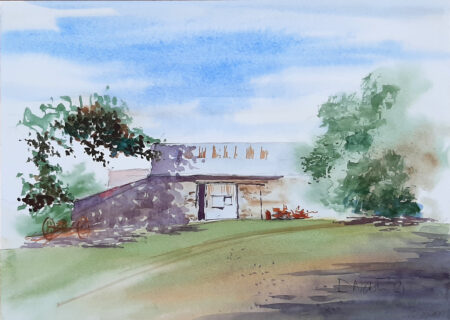 Max is a farmer, long-time Charleston man and our neighbour.  He and his wife have made us very welcome from our first days in Charleston, only a couple of years ago.   Their barn and their house date back to Charleston’s earliest years.   In fact, the property has been in Max’s family since 1848.  In both buildings you can see evidence of alterations, additions, and changes-of-use made necessary over more than a century.   Those changes create the kind of charm that only a long history can produce. 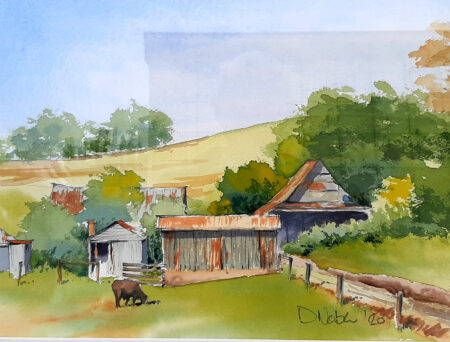 On Lobethal Road, just outside the town, is this farm.   It’s mostly the same, but looks a little different now, partly because of the Cudlee Creek bushfire and partly because of my artistic licence.   Only owners could pick the differences. 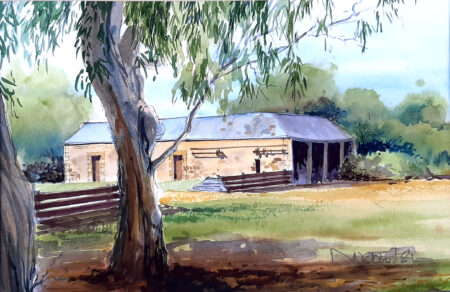 This one’s seen also in number 10.   It stands within 100 metres of Hope Cottage, number 12, and was, I believe, built by the same Charles Newman. 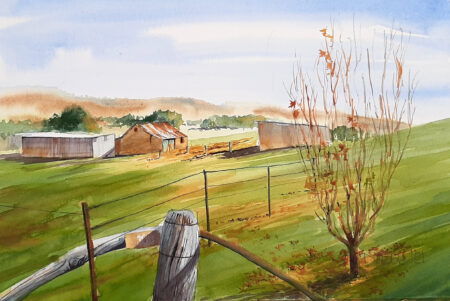 You’ll see so many scenes like this around Lobethal and Charleston.   I doubt that I’ll run out of subjects for paintings near here in my lifetime.   Even the weathered fence-posts make great subjects. 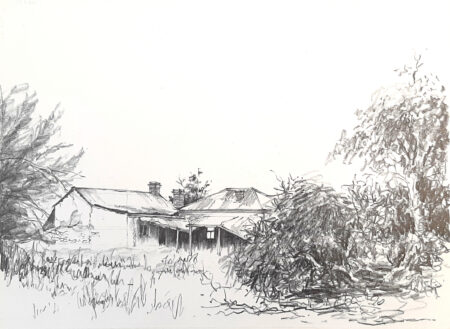 I did this sketch by the roadside on the way home one day.   It’s the same subject, near Owen, as in 11.    Ruins like this are almost inevitable when one property is absorbed into another.   Economics drive such amalgamations, and as one farmer told me, “You can’t justify spending the money to maintain this old stuff if you’ve got no use for it.”    In the meantime I’ll keep drawing and painting. 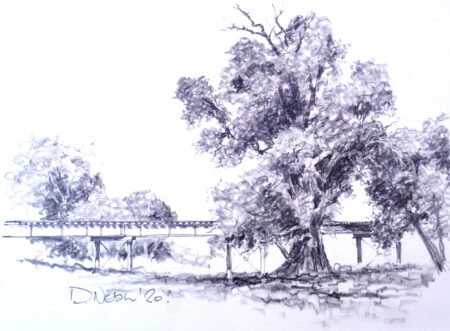 I made this sketch on a recent caravan trip to the North.   The bridge is part of a disused railway and Orroroo claims it as a tourist attraction.   While the bridge is interesting historically, the tree was what attracted me.   Maybe I’ll turn it into a painting one day. 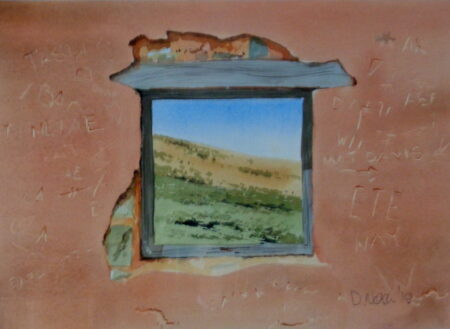 The locals tell me it’s pronounced “Kannaker”.  This window is just a small element in what remains of the once-thriving rural property beyond Hawker, in the North.   Tourists have carved into the soft lime-and-sand render on the walls of this part of the homestead. 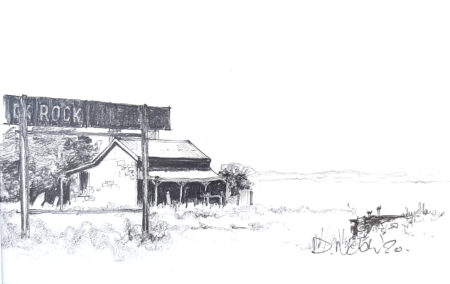 Yet another disused-railway subject.   There’s no shortage of them in South Australia where road-transport is now king.   The cottage may have been the Station-Master’s accommodation, but like the rest of Black Rock, always a tiny place, it’s deserted. 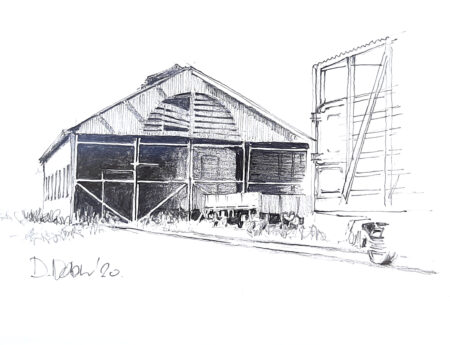 At last,  a railway that’s in use, although the Pichi Richi railway nowadays is solely for tourists.   The shed’s no longer used for locomotives, but it stands I think, as a handsome, practical building with just a hint of decoration in the curve of the vent above the entrance. 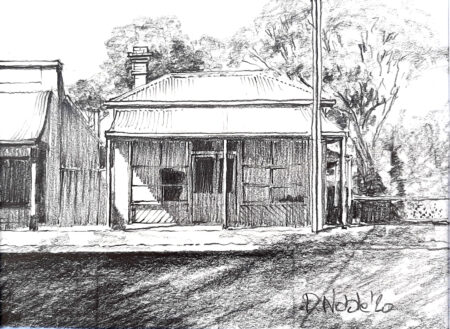 Yongala’s a very small town near Peterborough.   It’s a place you travel through rather than visit, unless you’re going to the pub where we’ve had some excellent meals.   It’s a town where almost every shop has closed because we can travel now to bigger, brighter places, or buy on-line.   This tiny shop was, I thought, a beauty. 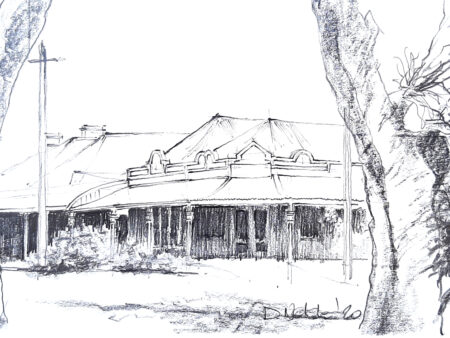 As I sat sketching in Yongala’s main street, on the neat lawns by the roadside, the owner, a stonemason, told me something of the work he’d done to restore this former shop.  It’s now where he lives.   He’s proud to have brought it from little more than a pile of wreckage into its former self. 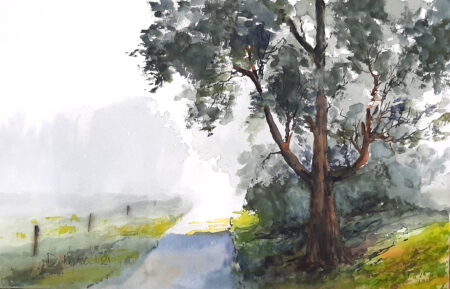 On some early mornings, before sunrise, a layer of fog lies across the Amy Gillett bikeway at Charleston.   As the sun begins to rise, the view’s like this, but within minutes the fog’s gone.   I’m not quick enough to have painted this from life.   I got off the bike, took a photo with my phone and did this picture in the comfort of my studio. 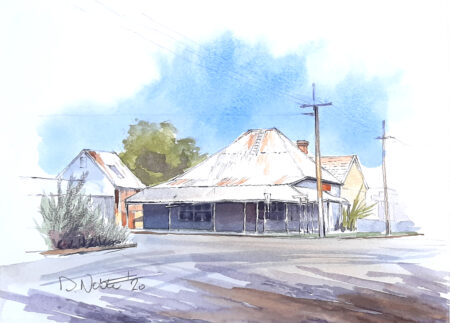 As with most other buildings in Yongala it’s no longer serving its original purpose.  I liked it because it’s a down-to-earth, no-frills country building that just did what it had to do, and no more.   I guess the original owner had no need to impress with a flashy facade because his customers had no choice but to stop here. 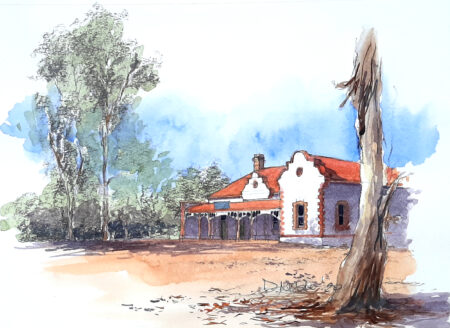 Some of the curious things about this building are its stone-and-brick gables.  Maybe the complex curves and right-angles come from a Dutch or Flemish heritage.    I was fascinated to see two things; the gables on the other side, facing the main street of Quorn, are similar but subtly different, and the former E.S and A bank in Quorn, as well as the bank in Terowie, have the same gables.   What was going on there? 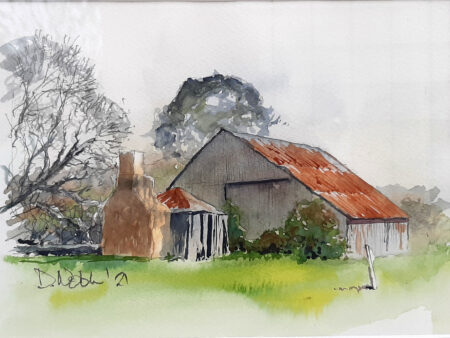 I believe the Brooks family owned, and perhaps still owns the buildings nearby.   I’ve known this little slab hut since our early days in the Hills in the 1970’s.   It has to be one of the very oldest surviving buildings anywhere in South Australia, although ‘surviving’ is almost too grand a word.   Nevertheless. it’s precious. 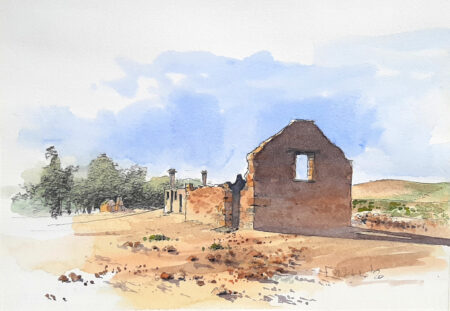 Hugh Proby established Kanyaka (pron. ‘Kannaker’) in 1852 as a large rural property, employing, it’s said, 70 families at one stage.   Horsepower was what they used for the heavy work, and here’s where the blacksmith (farrier?) made and fitted shoes, repaired door locks and made anything of iron.  Proby was in his twenties when he was swept away in a flood and drowned as he moved some stock to higher ground.